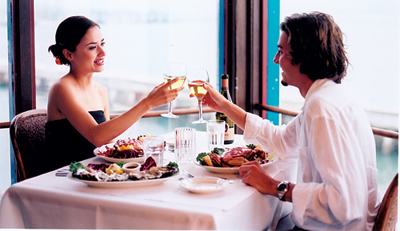 This is exactly what we looked like. I swear.

Dinner at the Barnyard

At my old job, I had friends who asked about my weekend. I loved to gather two or three as my audience while I acted out a funny story. Nowadays, nobody gives a crap about my weekend. Even the kindly therapists don't have time for my full reenactment as they have paying customers waiting. So let me tell you.

I was already hungry when we arrived at our hiking spot in RB Winter State Park this afternoon. After hiking up a steady slope for 40 minutes, I thought it best to head back down. I felt the telltale shakes of low-blood sugar, so suspended my insulin pump, ate a couple glucose tablets, and sat down for a few minutes. My ever-coddling husband speculated that the slope would not be steep enough to roll me down to the car if I could not walk it.

After recovering, we made it back to the car, and I immediately set TomTom to find a restaurant. The Barnyard was nearby. Don was concerned that he might smell after the hike, but I assured him nobody would notice at the barnyard. Don is not big on eating out, but it is the highlight of my week and I employ all my persuasive powers to coax him into it.

At The Barnyard we ordered a roast turkey meal to share and settled in for a quiet dinner. But this was not to be. There was a family of 3 adults and 3 children next to us, with a loud-mouthed woman dominating the conversation. When I was halfway through my salad, one of the children, a girl of about 12, started vomiting profusely over their table. Miss Loudmouth immediately began barking orders and recriminations at the girl's mother, "TAKE HER TO THE BATHROOM...TAKE HER TO THE BATHROOM!" ... "WHY DID YOU BRING HER OUT OF THE BATHROOM?...YOU WERE IN THE BATHROOM...WHY DIDN'T YOU LEAVE HER IN THE BATHROOM?" The girl continued throwing up, and was joined by a second child, a younger boy.

Don and I were bravely carrying on, looking down at our plates or straight ahead at each other. I could just make out the scene in my periphery. I was waiting for the girl's head to spin around and wondering when someone would finally lead her to the bathroom. We hadn't uttered a word yet, but I finally whispered, "do you want to change tables?" To my surprise, Don shook his head "no." He would explain later that he did not want to make them feel bad.

The sick kids finally went to the bathroom with their mother. Miss Loudmouth continued her ranting while grabbing paper towels and dishrags to clean up the mess.

Our meal arrived, and I was still determined to enjoy it despite the unappetizing ambiance. I began with a few small bites of turkey - a mistake in hindsight, for it was not going down so well.

In the meantime, the kids were back at the table and Big Mouth kept recounting the puking incident. "I SHOULD GET AN AWARD FOR NOT BARFING WHILE I CLEANED IT UP...AMANDA, DID IT MAKE YOU WANT TO BARF TOO?" The mother was actually coaxing the daughter to finish her chili. I wanted to ask if she was f*#%ing out of her mind. Somebody mentioned that she may have upchucked in the chili, which thankfully worked as a deterrent.

After trying a couple more bites, my food was helplessly stuck somewhere in my modified GI system, and I was wondering if I would puke next. We got a box to go and left. It was one of those rare times when I felt refined by comparison, despite having peed in the woods earlier.