Cat On A Hot Tin Roof

A man left his cat with his brother while he went on vacation for a week. When he came back, the man called his brother to see when he could pick the cat up. The brother hesitated, then said, ''I'm so sorry, but while you were away, the cat died."

The man was very upset and yelled,

The brother thought about it and apologized.

"She's on the roof and won't come down." 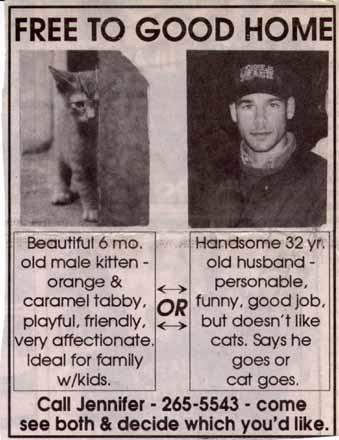 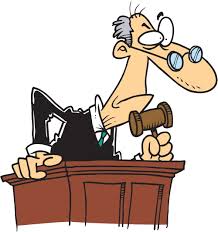 A judge asks a defendant to please stand.

"You are charged with murdering a school teacher with a chain saw."

From out in the audience a man shouts,

"Silence in the court!" the judge shouted back.

He turns to the defendant again and says,

"You are also charged with killing a paper boy with a shovel."

"Quiet!" yelled the judge. "You are also charged with killing a mailman with an electric drill."

The Judge thunders back,"If you don''t tell me the reason for your outbursts right now, I will hold in contempt!"

"I''ve lived next to that lying bastard for ten years now, but do you think he ever had a g*d***** tool when I needed to borrow one!" 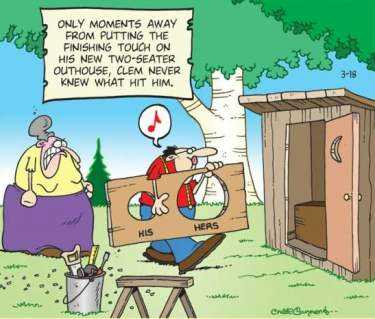 Ten Peeves That Dogs Have About Humans

Now lay off me on some of these thing's. We both know who's boss here! You don't see me picking up your poop do you? 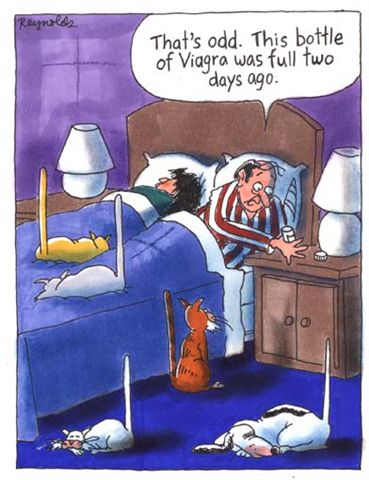 A man boarded an airplane and took his seat. As he settled in, he glanced up and saw the most beautiful woman.

He soon realized she was heading straight towards his seat. As fate would have it, she took the seat right beside his.

Eager to strike up a conversation he blurted out,

She turned, smiled and said,

"Business. I'm going to the Annual Nymphomaniacs of America Convention in Boston."

He swallowed hard. Here was the most gorgeous woman he had ever seen sitting next to him, and she was going to a meeting of nymphomaniacs.

Struggling to maintain his composure, he calmly asked,

"What's your business role at this convention?"

Lecturer," she responded. "I use information that I have learned from my personal experiences to debunk some of the popular myths about sexuality."

" Well," she explained, "one popular myth is that African-American men are the most well-endowed of all men, when in fact it is the Native American who is most likely to possess that trait.

Another popular myth is that Frenchmen are the best lovers when actually it is men of Jewish descent who are the best.

I have also discovered that the lover with absolutely the best stamina is the Southern Redneck."

Suddenly the woman became a little uncomfortable and blushed.

"I'm sorry," she said, "I shouldn't really be discussing all of this with you. I don't even know your name."

"Tonto," the man said, "Tonto Goldstein, but my friends call me Bubba."

The Monkey and the Leopard

A wealthy old lady decides to go on a photo safari in Africa , taking her faithful aged poodle named Cuddles, along for the company.

One day the poodle starts chasing butterflies and before long, Cuddles discovers that he's lost. Wandering about, he notices a leopard heading rapidly in his direction with the intention of having lunch.

The old poodle thinks, "Oh, oh! I'm in deep doo-doo now!" Noticing some bones on the ground close by, he immediately settles down to chew on the bones with his back to the approaching cat. Just as the leopard is about to leap the old poodle exclaims loudly, "Boy, that was one delicious leopard! I wonder if there are any more around here?"

Hearing this, the young leopard halts his attack in mid-strike, a look of terror comes over him and he slinks away into the trees "Whew!", says the leopard, "That was close! That old poodle nearly had me!"

Meanwhile, a monkey who had been watching the whole scene from a nearby tree, figures he can put this knowledge to good use and trade it for protection from the leopard. So off he goes. But the old poodle sees him heading after the leopard with great speed, and figures that something must be up. The monkey soon catches up with the leopard, spills the beans and strikes a deal for himself with the leopard.

The young leopard is furious at being made a fool of and says, "Here, monkey, hop on my back and see what's going to happen to that conniving canine!

Now, the old poodle sees the leopard coming with the monkey on his back and thinks, "What am I going to do now?", but instead of running, the dog sits down with his back to his attackers, pretending he hasn't seen them yet, and just when they get close enough to hear, the old poodle says.

"Where's that damn monkey? I sent him off an hour ago to bring me another leopard." 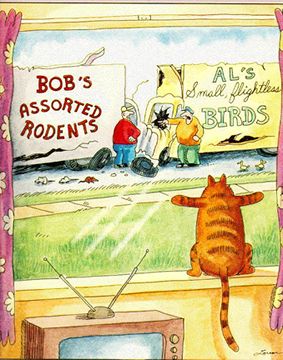 The Magician and the Parrot 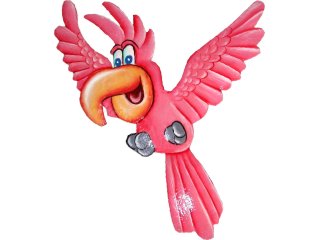 There was magician on a cruise ship, and he was really good. He was performing the highlight of his show when a parrot walked onstage and squawked, ''It's in his sleeve!''

The magician chased the bird away.

The next day the magician was performing his highlight again (in front of a smaller audience) when the parrot walked onstage and declared, ''It's in his pocket!''

The next day, as he was performing the highlight, he saw the parrot in the crowd. But before the parrot could ruin the magic trick, the boat crashed into a rock and sank.

The magician was lucky enough to find a board to hang on to. On the other end of the board was the parrot.

They stared at each other for three full days, neither of them saying anything, when suddenly the parrot said, ''I give up, what'd you do with the ship?''

A priest is visiting a parishioner's home and hears a voice coming from another room saying "<squawk> I'm a whore." Appalled, he asks who is talking that way. The parishioner takes the priest into a back room and shows him his parrot. He explains that the parrot was raised in a brothel and only learned to say this one thing. Because of this, he was able to buy the parrot at a bargain price.

"That's terrible language!", the priest exclaims, "Bring your parrot over to my house and I will put her in with my two parrots who I have taught to pray and read the Bible. My parrots will teach your parrot to stop saying that terrible phrase and she will learn to pray and worship instead."

So the next day, the man brings his parrot to the priest's house. The priest's two male parrots are holding rosary beads and praying in their cage.

The man puts his parrot in and she says as usual, "<squawk> I'm a whore."

One male parrot looks at the other and exclaims, "PUT DOWN YOUR BIBLE BOB, OUR PRAYERS HAVE BEEN ANSWERED!!!!!"

Three hicks were working on a telephone tower - Steve, Bruce and Jed. Steve falls off and is killed instantly.

As the ambulance takes the body away, Bruce says, "Someone should go and tell his wife."

Jed says, "OK, I'm pretty good at that sensitive stuff, I'll do it."

Two hours later, he comes back carrying a case of beer.

Bruce says, "Where did you get that, Jed?"

"Steve's wife gave it to me," Jed replies.

"That's unbelievable, you told the lady her husband was dead and she gave you beer?"

Well, not exactly", Jed says. "When she answered the door, I said to her, 'You must be Steve's widow'."

And I said, "I'll bet you a case of Budweiser you are.

There once were two Irishmen, named Shawn and Pat, who were the best of friends. During one particular night of revelry, the two agreed that when one passed on, the other would take and spill the contents of a bottle of fine, Irish whiskey over the grave of the fondly missed and recently dead friend.

And as fate would have it, Shawn would be the first to pass.

Pat, hearing of his friend's illness, came to visit his dear friend one last time.

Bashfully, Pat started, "Do you remember our pact, Shawn?"

"Yes, I do Patty," Shawn strained.

"And, you'll also remember that I was to pour the contents of a fine, old bottle of whiskey over your grave, which we have been saving for, going on 30 years now?" said Pat.

"Yes Patty, I do," whispered Shawn.

"And what are you gettin' at Pat?" asked Shawn, briskly.

"Well Shawn, when I pour the whiskey over your grave, would ya mind if I filter it through my kidneys first?"

Brenda O'Malley is home making dinner, as usual, when Tim Finnegan arrives at her door.

"Of course you can come in, you're always welcome, Tim. But where's my husband?"

"That's what I'm here to be telling ya, Brenda." There was an accident down at the Guinness brewery..."

"I must, Brenda. Your husband Shamus is dead and gone. I'm sorry.

Finally, she looked up at Tim. "How did it happen, Tim?"

"It was terrible, Brenda. He fell into a vat of Guinness Stout and drowned."

"Oh my dear Jesus! But you must tell me true, Tim. Did he at least go quickly?" 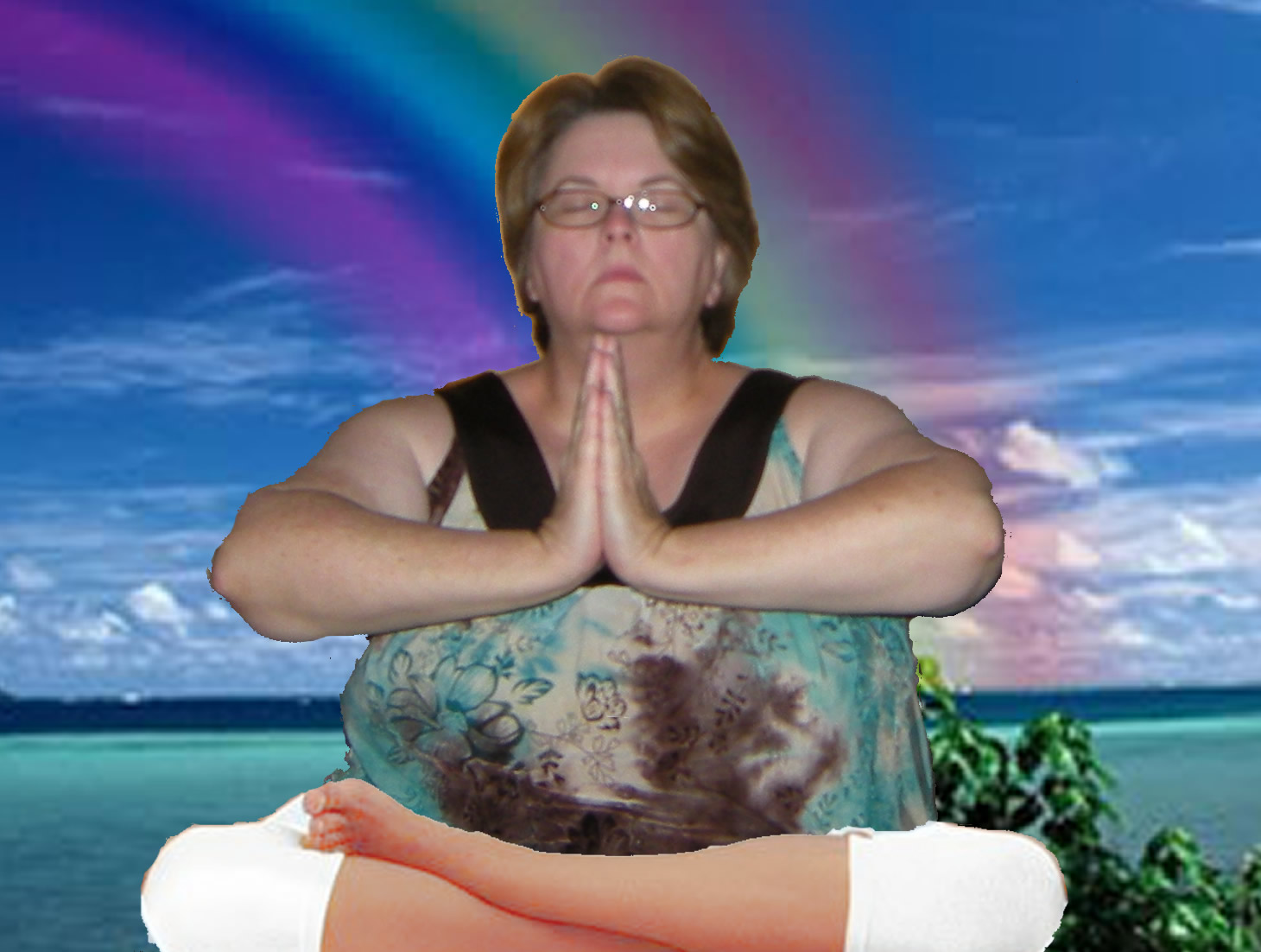 I've learned that you cannot make someone love you. All you can do is stalk them and hope they panic and give in...

I've learned that one good turn gets most of the blankets.

I've learned that no matter how much I care, some people are just jackasses.

I've learned that whatever hits the fan will not be evenly distributed.

I've learned that you shouldn't compare yourself to others - they are more screwed up than you think.

I've learned that depression is merely anger without enthusiasm.

I've learned that it is not what you wear; it is how you take it off.

I've learned that you can keep vomiting long after you think you're finished.

I've learned to not sweat the petty things, and not pet the sweaty things.

I've learned that ex's are like fungus, and keep coming back.

I've learned age is a very high price to pay for maturity.

I've learned that I don't suffer from insanity, I enjoy it.

I've learned that we are responsible for what we do, unless we are celebrities.

I've learned that artificial intelligence is no match for natural stupidity.

I've learned that 99% of the time when something isn't working in your house, one of your kids did it

I've learned that there is a fine line between genius and insanity.

I've learned that the people you care most about in life are taken from you too soon and all the less important ones just never go away. And the real pains in the ass are permanent.

Ways To Maintain A Healthy Level Of Insanity

Send This To Someone To Make Them Smile.....