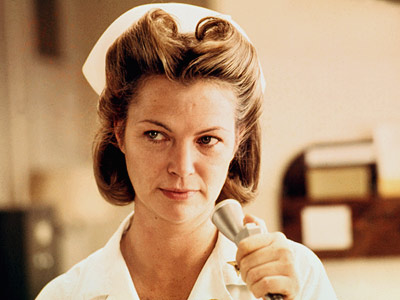 Nancy had warned me that the second day was the worst. The morning dawned with bowel pains that grew worse throughout the day. They had taken away the button that allowed me to administer morphine myself. Now I would have to call upon the staff when I needed pain-killer, which would be often.

A different nurse was in charge that day, a pretty young thing who smiled and seemed pleasant, but has a lot to learn about care-giving. Nancy and I would rack up a list of grievances:

Some of the day was great! My mother-in-law sent a beautiful planter, then visited me. I was so glad to have company. Nancy's in-laws came to pick her up, and I enjoyed talking to them. A new roommate, Deb, moved in. I was so happy when Kimber and Garrett came later in the day and brought a vase of lovely flowers. Garrett was fascinated by the procedure and started reading all my materials.

Alas, in the evening the bowel pains grew worse to the point of nausea. A new nurse came on duty and told me that it was gas and I needed simethicone to relieve both the pain and the nausea. She would request it right away. Great! Help was on the way. She was a sweetheart, and tried all night to get it. The pain was excruciating - the worst of my life, and I have had gallstones.

My IV site was also hurting, but the last thing I wanted to do was ask for a new site. When a nurse flushed the port, I grabbed my hand and shrieked in pain. She seemed a little annoyed. This was all I could take and started crying my eyes out, "I feel lousy!"

We tried walking down the hall, and there was a man having a worse time than me, shouting, "You're the damn doctor; you tell me where it hurts!"

I am always aware there are people far sicker than I am, and I do not like to appear wimpy. Even as a child I tried to keep a stiff upper lip. I remember getting my ears lanced, being the example pointed out by another parent, "See, that little girl's not crying." Now in a hospital ward full of bariatric patients, I feared I was the only whiner of the night.

Giving up on the simethicone, I finally asked for more pain med which barely took the edge off. A woman with the IV team came and gave me a new site, and she was fantastic! People who can stick you without pain are worth their weight in gold!

I slept fitfully that night, dreaming of gas pains, waking up with gas pains. Wondering why it was so hard to get a freaking pill and why they didn't order it to start with.