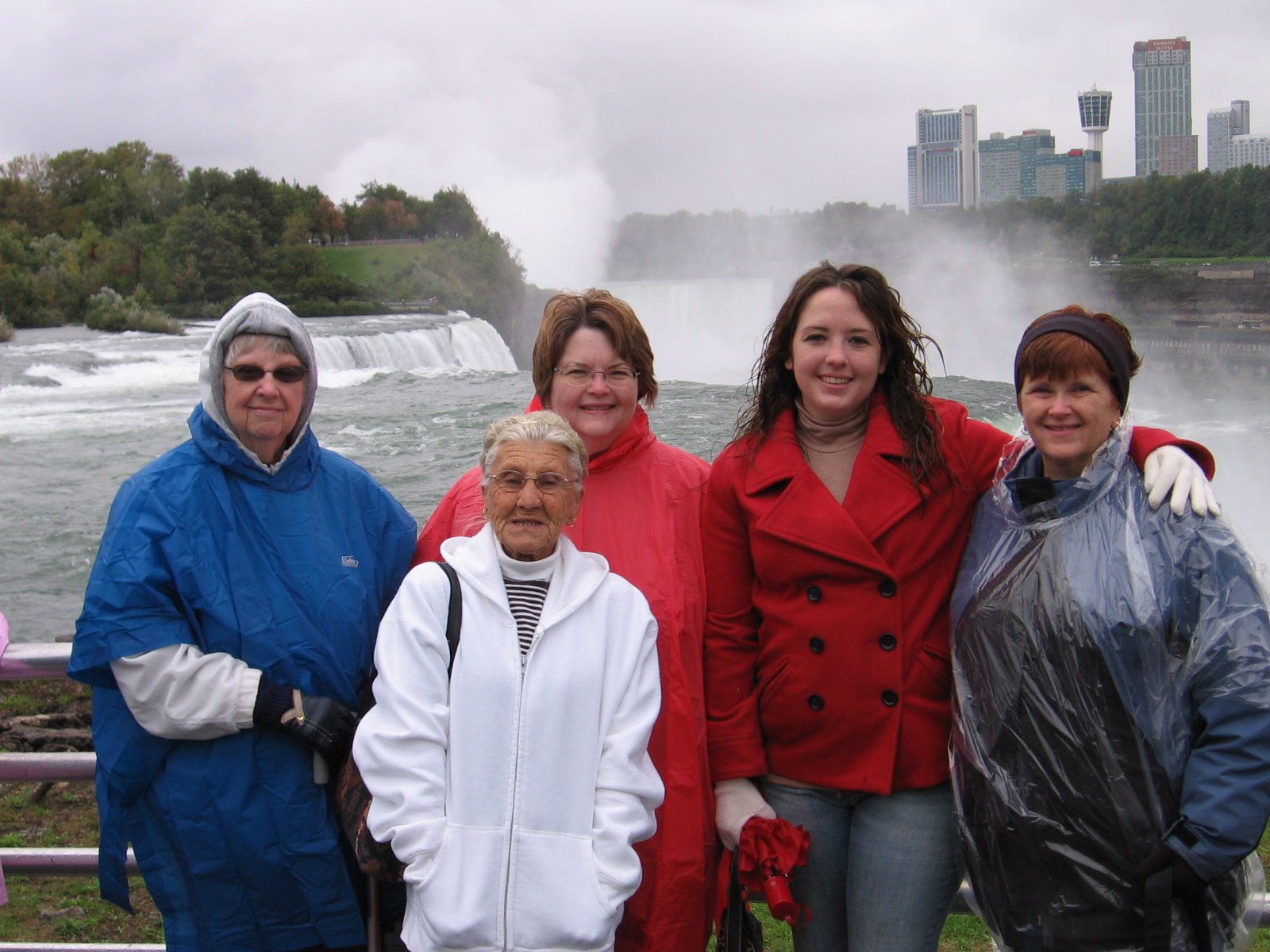 Last Friday, my extended posse hit the road for a weekend in Niagara Falls. I can sum up the trip with 4 words - fun, arguing, and food-deprivation.

By some miracle we made it all the way to Olean without an argument. Kathi, Mom, Phyllis, and I never ran out of scintillating conversational material, beginning with our favorite chewing gum flavors (I prefer spearmint) and ending with a high-level discussion on cracker sogginess (I prefer that my crackers never touch the soup). 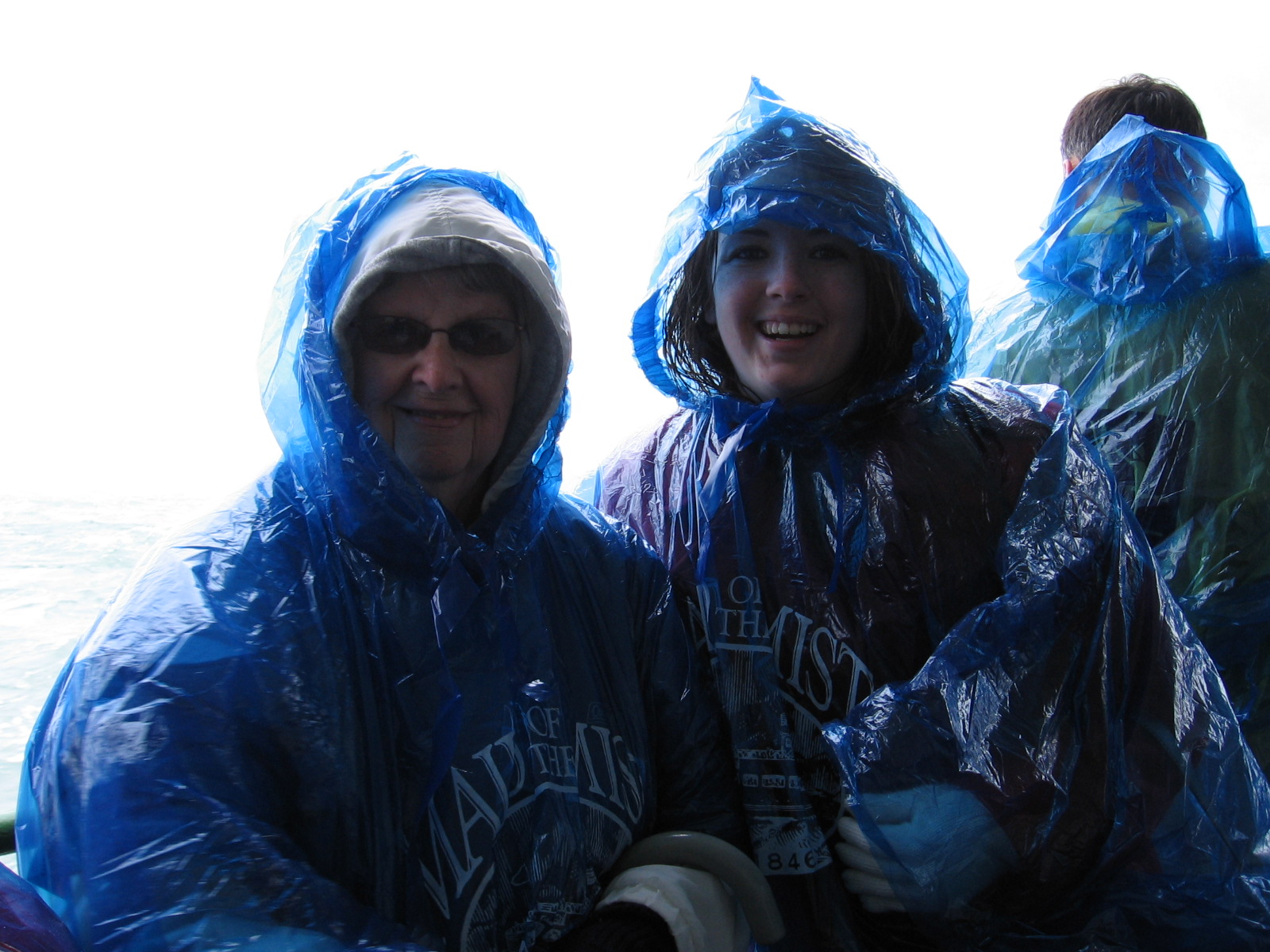 On board the Maid of the Mist

So we picked up Kimber in Olean, NY where she is serving a leg of her physician assistant clinical rotations, and the action soon began. Kimber recommended dinner at a nice steakhouse in town. Makes no difference to me where we eat, for I am packing my fare. I attempted to warm my ricotta cheese and spaghetti sauce over the candle on the table, which got a few sideways looks from our waitress, but alas, it would not heat up. This meal that was once so delicious, has now grown old. It was the second meal I suffered through, and there would be many more.

Aunt Phyllis ordered some kind of beef meal which she requested well done. Oh what a disappointment when it was "raw" according to her. To be fair, there were a few pink spots, and I am likewise appalled by rare meat, but she went on and on about it. We all told her to send it back, but my Aunt's hearing is not so good, and she was convinced we were arguing with her. She gets really miffed at us when we "move our mouths and nothing comes out." It does not occur to her that the problem may be on her end. When the waitress brought her another plate, Phyllis was sure she had just rearranged the pieces so the "raw" part was hidden. At the end of the meal, Kathi tipped her head to guide my gaze to Phyllis's teeth in her hand. When Mom returned from the restroom and saw this, she scolded her, "put your teeth back in your mouth." We're not exactly the Vanderbilts.

We finally rolled into the Holiday Inn around 9:30 pm, and Kimber urged us to have a dip in the indoor pool. Kimber, Kathi, and I were already relaxing in the warm water when Mom and Phyllis arrived. Mom carefully climbed down the ladder on the shallow end, but Phyllis was poised to dive in the deep end. We were yelling to stop, but she couldn't or wouldn't listen. Mom and Phyllis had been lifeguards as teens, but it was probably30 years since my Aunt had been swimming. There was no talking her out of it. Kimber and I hurried over and positioned ourselves on either side lest she drown. There was no lifeguard on duty. All the while Mom was yelling, "don't you dare dive in there!" But in she went, all 90 lbs of her, swam to the shallow end, and asked, "why can't I float anymore?" Could it be because she doesn't have a spare ounce of fat on her body?

Meanwhile, something amazing had happened to my mother. When she stepped into the water, she was transformed into a 12-year-old girl! "You all stand over there and try to cross to the other side without me tagging you." My sister and I would exchange many amused, bewildered glances as we were forced to race on our knees, swim on our backs, and play Marco Polo. Fortunately there were not many others around. Word had probably spread that there was a gang of gray-haired hooligans in the pool.

Unfortunately the fun wouldn't last long. Phyllis sucked in some water and started coughing violently. Kimber was worried she would get pneumonia. But the thing that really turned the tide was when five, cold, wet, women all wanted in one bathroom. There would be many lavatory disputes that weekend - who took too long, who used whose wash cloth, who piled up too many toiletries on the vanity. Phyllis tried to get a bath the first night, running the hot water for some time before realizing it was going down the drain. Mom kept trying to tell her there was no plug, but she couldn't hear. We would also disagree about the allocation of the limited closet and drawer space and who would sleep in the folding bed. Unfortunately for Phyllis, the other 4 of us jumped into bed while she was in the bathroom, leaving her the cot.

Phyllis would disappear from the hotel room once in a while. We realized she was going down to the lobby, then outside to smoke. Guests arriving would have been greeted by a wizened, pajama-clad, pint-sized octogenarian in pin-curls. 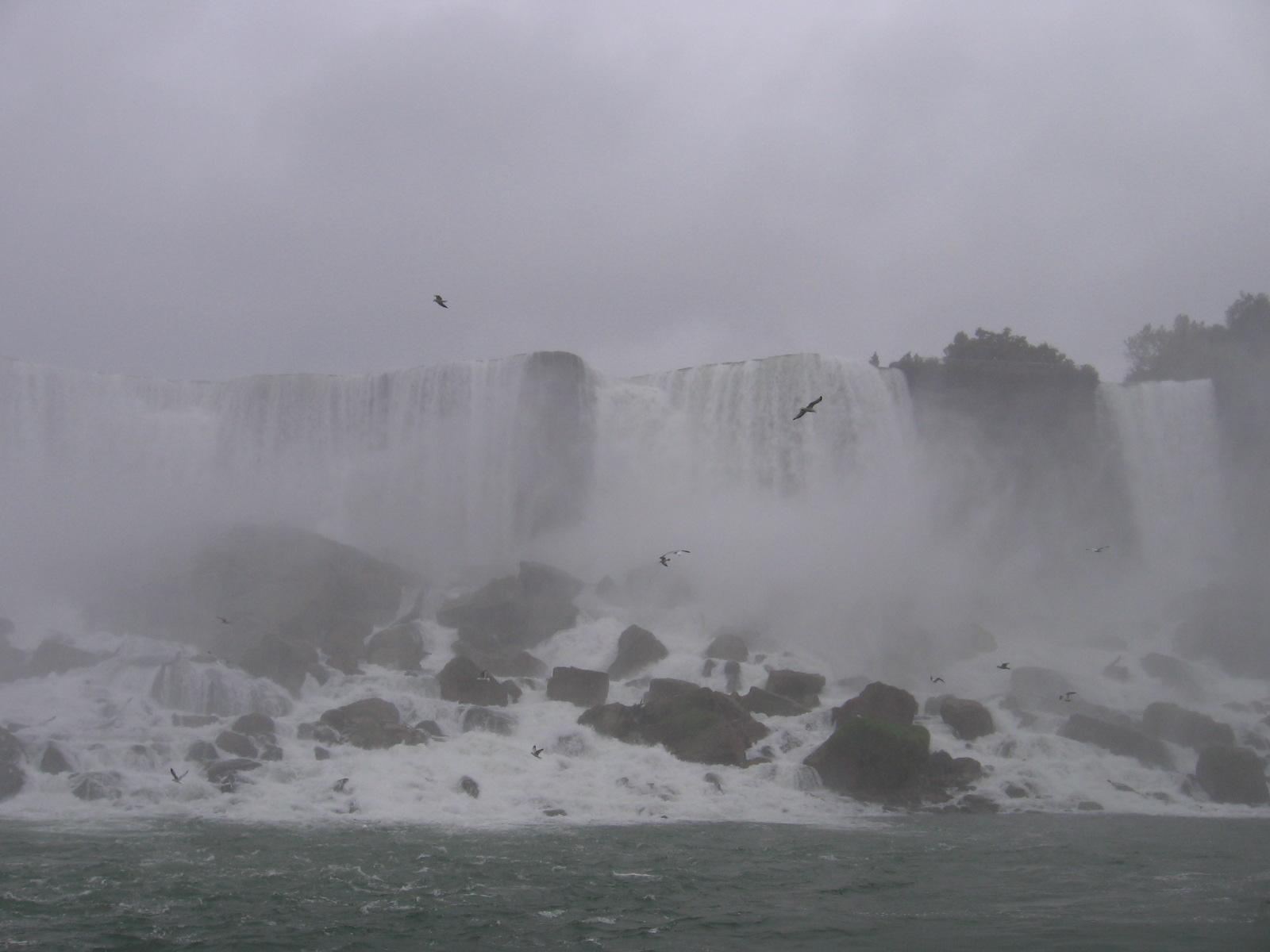 The view from the Maid of the Mist.

The next day we took in the Falls! If you live in driving distance, but won't visit because you think Niagara Falls is a tacky, over-hyped, tourist trap, you are really missing something. It was my third trip after many years, and I will never cease to be awestruck. Seedy motels, souvenir vendors, and wedding chapels cannot undo the beauty and majesty of the Falls. Clearly there were many visitors from around the world. 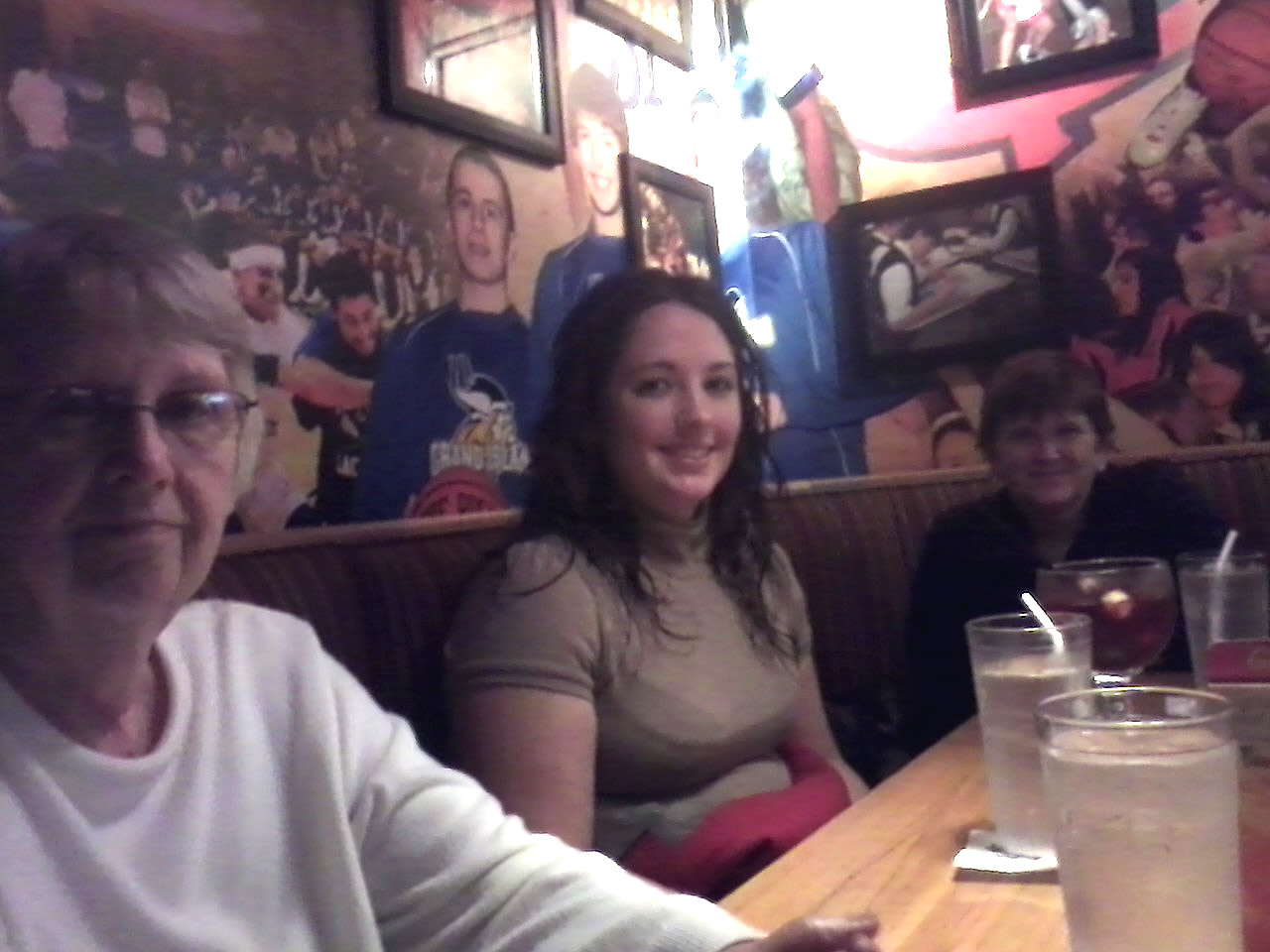 The others have a good meal at Appleby's.

After spending the day at the world's oldest state park, we went out for supper again. Where shall we go? So many restaurants to choose from. I hadn't eaten much all day and was truly, excruciatingly hungry, and feeling more deprived than ever. At Appleby's I started to crack. "Give me that menu!" Kimber tried to take it away. I desperately spat, "I can't stand it! I need food! This is why I didn't want to come...I was fine at home" as I smacked Kimber with the menu. I ordered tomato soup and milk. This just sucks!

We stopped at Wegman's where I stocked up on things I could eat - skim milk, a particular carb-control yogurt. It was satisfying. Driving back to the hotel on a particularly rough road, Phyllis complained that Kathi was hitting every bump. We expounded on how she was actually missing a few, and with a little more effort could manage to hit them all. 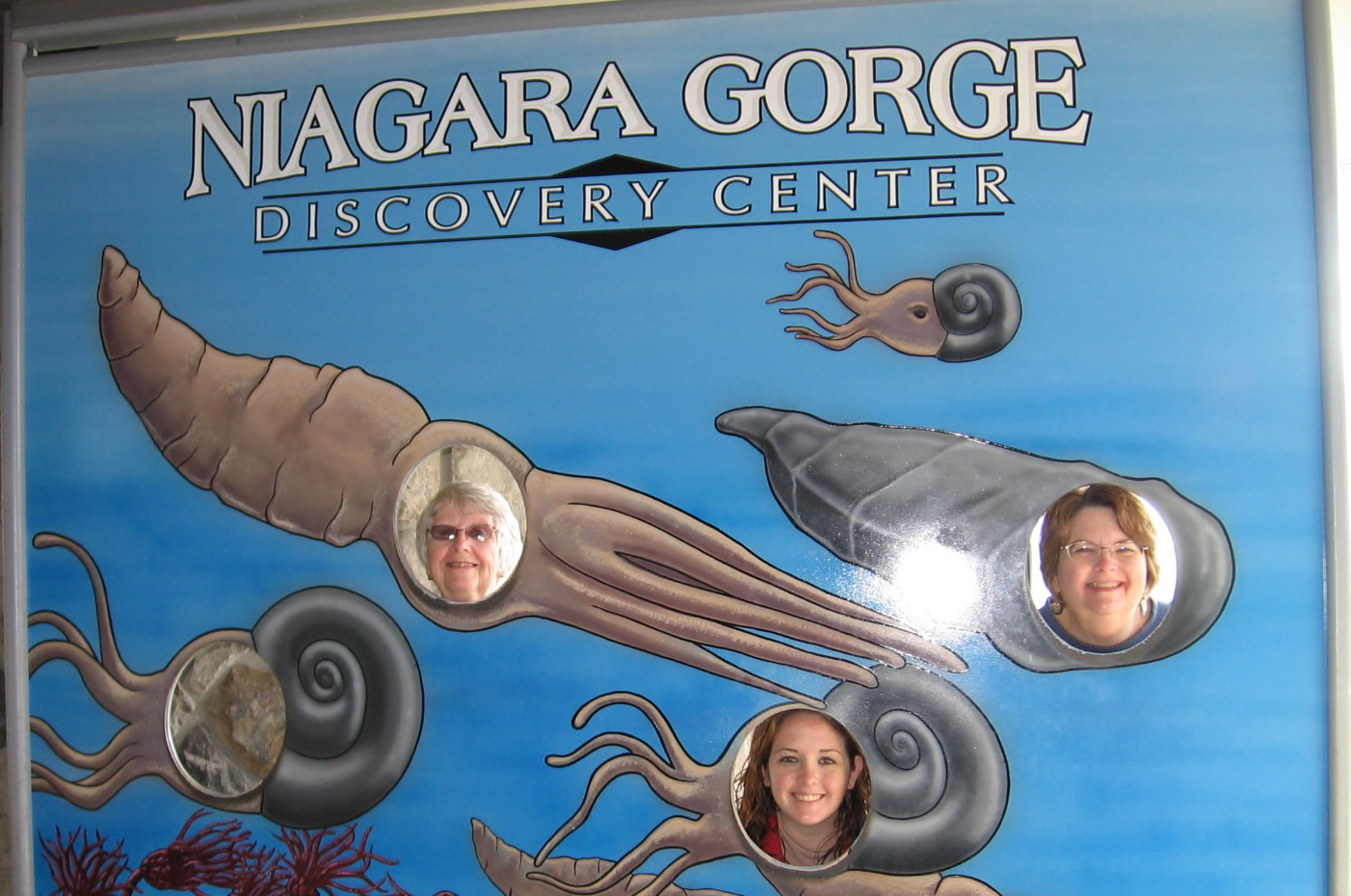 We pose at the Discovery Center.

As we were driving, Kimber persuaded me and her Gram to go to a casino for the first time in our lives. Gambling goes against my upbringing, and after 8 months of unemployment, I certainly didn't have any disposable income to squander. But who can resist my daughter's enthusiasm. In we went to this noisy, smokey, Walmart-sized building where gray heads leaned over slot machines and a band played overhead. Kimber led us through, looking for just the right game for us. I spied a 50-cent poker machine and immediately sat down. I fed in a five-dollar bill and won every game, doubling my money in 10 minutes. Kimber, the experienced gambler, urged me to walk away a winner. Mom, playing beside me, came out on the losing end. Kimber, borrowing a twenty from each of us, went to the roulette wheel and eventually was able to pay us both back, and turn a profit to boot.

Now that I had gone over to the dark side, I was thirsty for more. I asked Kimber where I would find the poker tables with real people. She laughed, telling me they were in private rooms, and tried to dissuade me. I protested, "We've prepared for this our whole lives!" It's true. We were all raised on poker from the time we could hold the cards. By the age of 5, Dad would look at my hand to advise me, then play his hand as if he didn't know what I had. We never wagered money of course - only matchsticks, poker chips, or whatever was available. Now at the casino I wanted to play a low-stakes game with human beings so that a machine was not setting the odds. But it was time to collect our winnings and leave.

Not much to report on the way home except breakfast at Bob Evan's where I enjoyed scrambled eggs. Who cares what the rest of them ate? We did a little shopping in Olean before we deserted my poor daughter there. She is lonely there without friends or family. And with her fiance, Garrett, off hunting moose, she cannot even talk to him on the phone. The old house she's living in creeps her out, and there are some scary characters around.

It was a rainy 37 degrees driving home through Elk County where my sister did spot an elk along the side of the road. In fact, the whole weekend had been drizzling and chilly. When I got home, I took a long, hot shower, then put on flannel pajamas for the first time in eons. What a relief to not fight for bathroom time or watch people eating fabulous meals.

Mom would spend an hour complaining about Phyllis the next time I saw her. It was her idea to invite Phyllis! And wouldn't it have been dull otherwise?